Your health is highly precious to us. So, Don’t only rely on the information in this article. The content we write is not intended nor recommended as a substitute for medical advice, diagnosis, or treatment by your own doctor.

The causes of IBS are not yet fully understood.

No single cause of IBS could apply to every patient.

Understanding the specific cause of YOUR IBS may be the first real step to overcome It.

Based on what specifically caused you IBS, you and your doctor can define the best treatment strategy.

I gathered here all the research about IBS causes, in a simplified form.

Read thoroughly, and try to figure out what caused you IBS.

The 9 Causes Of IBS:

1- Abnormal Motility Of Your Intestine.

This is one of the oldest theories about the causes of IBS, it was suggested that abnormal patterns of movement of your colon and small intestine is the cause of your IBS.

Your intestine and colon contracts and relaxes in “waves”. These waves are synchronized. We normally don’t feel them.

It was suggested that IBS occurs due to:

Evidence and how this can be applied:

The link between abnormal motility of your intestine and your IBS exists. But research is still defective as:

The abnormal bowel contractions are the basis of different antispasmodic treatments whether prescription or over the counter antispasmodics like Buscopan or Peppermint oil capsules.

Also, some other drugs may modify this abnormal colon motility, for example, Immodium (Loperamide) slows down the motility of your colon and consequently relieves diarrhea

The response to these “motility drug” is variable. So, it may be the cause in some IBS patients but not all of them.

2- Your Colon Is Over-sensitive.

Pain is perceived from your intestine by stretch receptors and other chemical mediators. This occurs when there are an extra-amounts of gas or food (distension and bloating).

Extra gas in your colon -> more stretch of colon walls -> stimulation of stretch receptors inside your colon wall -> sends a signal to your spinal cord and brain to feel pain.

You as IBS patient may feel gut pain, bloating, and distension even with normal amounts of gas inside your intestine.

Normal amounts of gas in your colon -> abnormally stimulate the stretch receptor in your colon wall -> sends a false signal of distension -> you feel pain (colics, distension, or bloating). 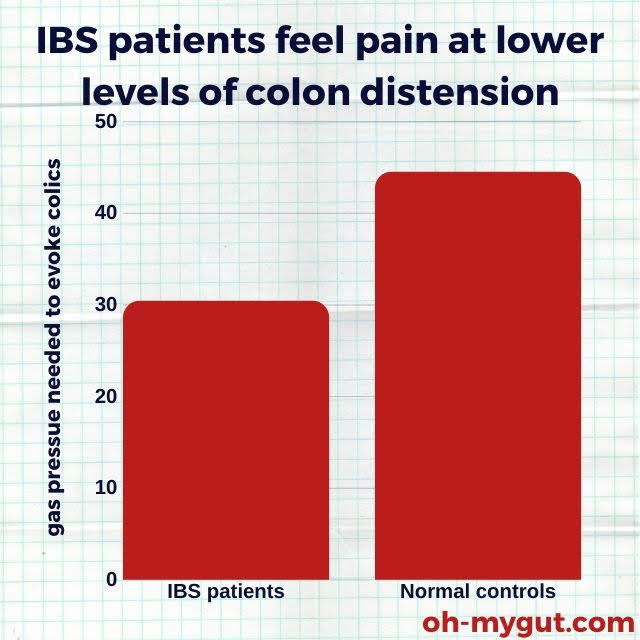 Evidence & how this can be applied.

But the point is that colon hypersensitivity is a frequent finding in many IBS patients.

3- Actual Inflammation Inside Your Colon Wall!

The widely accepted theory about irritable bowel syndrome is that it is a “functional disease”.

But there is scientific evidence that an actual inflammation could happen.

This is more common with IBS-diarrhea and Post-infectious IBS.

In 2002, Dr. Törnblom and his team found a low-grade inflammation and inflammatory cells inside the colon wall of 10 patients with severe IBS.

This may suggest that IBS is caused by an organic cause and it is an actual disease.

Having an attack of enteritis raises your odds of getting IBS Up to 6 folds [REF]. This is more common with: 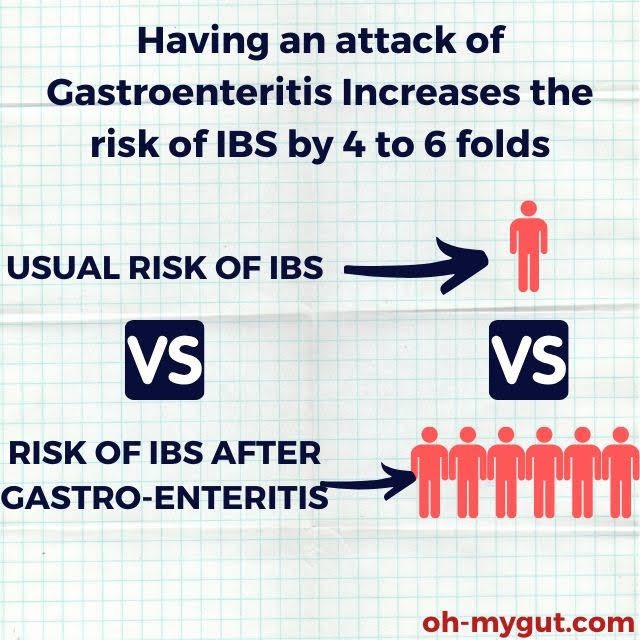 It can occur following any type of gut infection (Bacterial, protozoal, viral. Or helminthic).

Researchers still don’t have a clear explanation of why this occurs, but causes may be [REF] [REF] [REF]:

If your IBS has started after a severe attack of gastroenteritis you have to consider post-infectious IBS.

Discuss the issue with your Doctor.

5- changes in the types of colon bacteria may be the real cause of IBS. 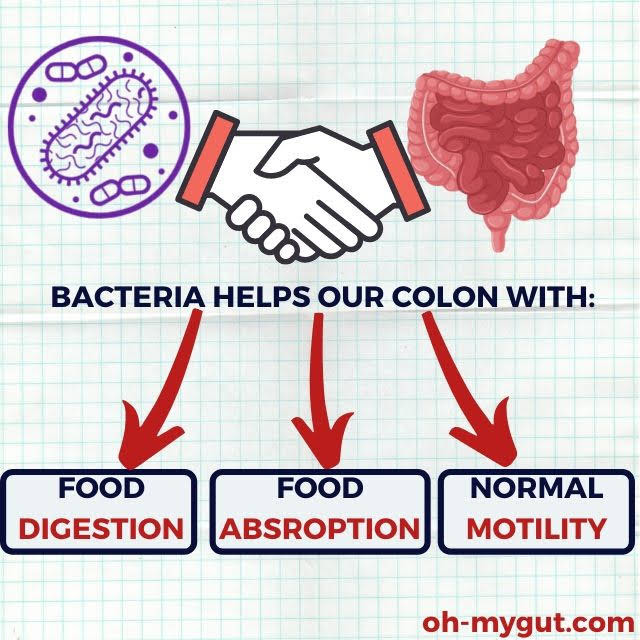 These organisms are vital for your colon health as they:

An interesting study about the role of fecal micro-organisms (Microbiota) in IBS found that:

These eye-opening observations may lead us to a better understanding of the causes of IBS.

Based on this speculation, probiotics emerged as an effective treatment modality for IBS.

Probiotic is a “living microorganisms” that can revert or decrease the change of your colon microbiota, thus improving your IBS symptoms.

Probiotics can be formed from a single strain or multiple strains of bacteria. They are found in many forms (capsules, sachets, probiotic yogurts, and others).

Although some studies couldn’t detect significant changes in fecal microbiota following the administration of probiotics, the improvement of the IBS symptoms with probiotics is evident.

Another Super-interesting application of this theory is FMT. FMT or fecal Microbiota Transplantation is a trial of transfusing the fecal matter of a healthy person to another IBS patient.

Some studies showed that FMT can be an effective permanent treatment for IBS, But results still conflicting and still under trials.

The FMT is an established treatment in certain medical conditions like “Clostridium difficile infections”.

But it still under trial in IBS.

6- Bacterial Overgrowth (Is SIBO The Cause Of Your IBS?)

In the previous section, I explained to you How the changing the type of your Microorganisms can be the cause of your IBS.

But what about the Micro-organisms that already present inside your gut.

What if they decided to behave differently?

Bacterial overgrowth means that the naturally occurring Microorganisms inside your intestine increase in number.

This overgrowth may have drawbacks on your intestine. The “too much” microorganisms may produce too much waste like gases or toxins. And the unwanted gas and waste may cause your symptoms like distension, colics.

Small Intestinal Bacterial Overgrowth (SIBO) is linked to IBS. but the research is conflicting:[REF | REF |REF]

What does this mean?

The Link between SIBO and IBS is still weak. But eradicating Bacterial overgrowth is evidenced to improve Many IBS symptoms

For Example, a gut antibiotic called Rifaximin (Xifaxan) is approved for the treatment of IBS-diarrhea with good results.

Can food be the cause of your IBS?

Several studies have investigated the role of food in IBS. and as always, there is some evidence.but also conflicting results present.

For example, A study showed that the number of people with food allergies (detected by skin tests) is greater in those who have IBS than non-IBS patients.

However, another study concluded that foods that tested positive by skin test didn’t  necessarily cause IBS attacks.

Here are the 2 most suggested food causes of IBS:

The most common carbohydrates that cause IBS symptoms are FODMAPs. FODMAPS are a special type of carbohydrates (short-chain sugars).

When they enter your gut they become readily fermented and produce too much gas and cause IBS symptoms.

Restricting FODMAPs is one of the best strategies that can help your IBS symptoms.

Fermentable: means that gut bacteria break them down producing lots of gas.

Polyols: They are substances called sorbitol mannitol xylitol and maltitol present in certain types of fruits like apples and watermelon and in artificial sweeteners like artificially sweetened gum and alcohols.

Gluten is a protein present in wheat and barley. Some people have extreme gluten intolerance; a condition called celiac disease.

Some studies suggested the presence of Mild or Hidden gluten sensitivity in IBS patients. [REF | REF]

Also, you may experience symptom relief after cutting gluten from your diet. Also, we (doctors) may need to test for celiac disease if you have IBS (specially IBS-diarrhea).

Stress is the enemy of IBS.

One of the most commonly suggested causes of IBS is Psychological dysfunction or (brain-gut axis dysfunction.) 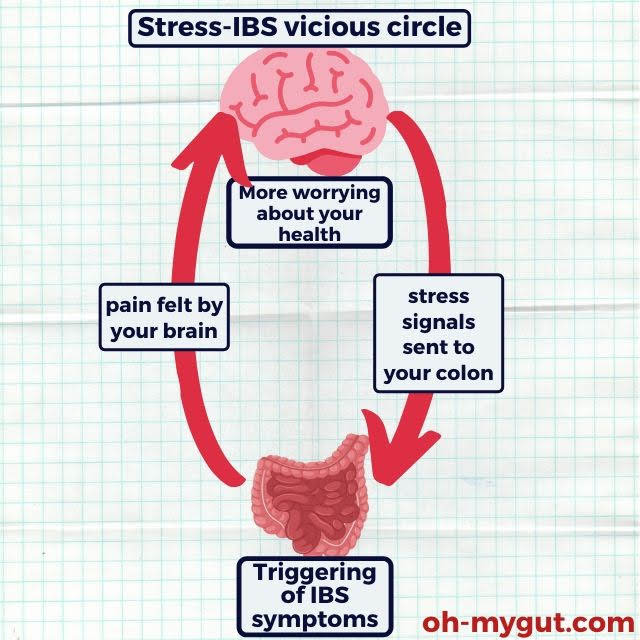 Your colon has local nerve plexuses called the “myenteric plexus”.

the Myentereic plexus acts as a local gut-brain. Also, it is connected to our main brain.

Psychological stress lets the brain send abnormal orders to your gut, causing the pain and stool changes (diarrhea or constipation).

The most common psychological conditions that may cause you to have IBS:

If one of your family members has IBS you may have increased risk of you getting IBS.

Although the association is not strong. Some studies suggest that genetic causes of IBS may exist. 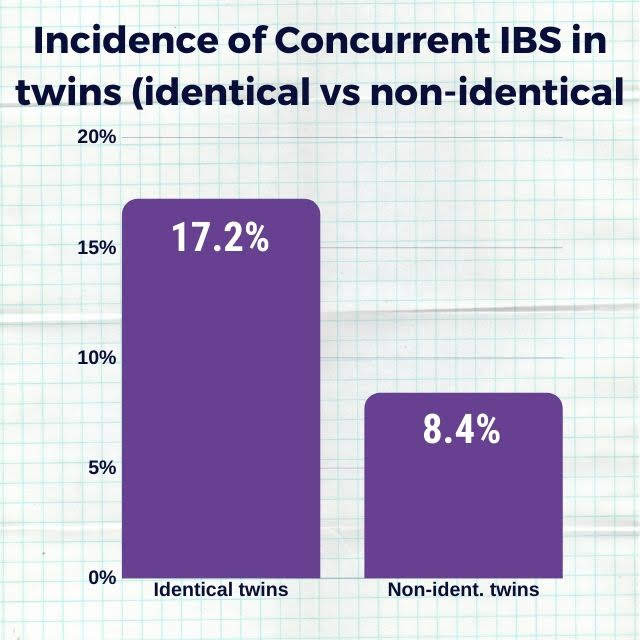 They found that identical twins (who have the exact same genes) are more liable to concurrently have IBS than non-identical twins.

My conclusion about IBS causes:

An endless amount of research about the causes of IBS is present. but no suggested cause of IBS can be applied to all patients

My personal opinion; Every IBS patient has its own circumstances. your Unique IBS cause may influence your Unique plan of treatment

Understanding the specific cause of your IBS may help you to make the right decisions about your condition.

always discuss the real cause of IBS with your doctor.

Metamucil For IBS: In-depth Review Of Its Efficacy, How To Use, & Side Effects.

IBS And Sugar: 10 Surprising Facts & When To Cut It Out

IBS pain relief: 8 Most Effective Tips From A Doctor With IBS.

How Is IBS Diagnosed: Over-Simplified (With Infographics)!

How To Cure IBS In One Day (9 most effective strategies) A gastroenterology doctor & Irritable Bowel Syndrome sufferer!
I founded oh-mygut.com to share my experience and provide oversimplified, EVIDENCE-BASED tips and information about IBS & other gut symptoms.

Feel free to ask me anything in comments!